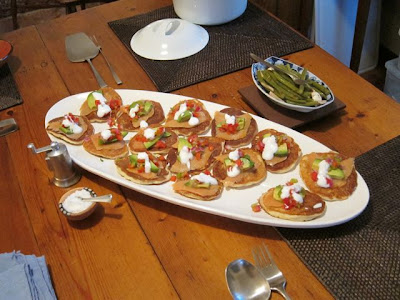 Once upon a time, long ago and far away, we made a fabulous dinner.

(Truth to tell, it wasn't far away at all: it was in Cambridge.  And it wasn't all that long ago, either, although it was before Labor Day, which feels like ancient history by now.)  Anyway, in that distant epoch, Colin and his lovely girlfriend, Eden, came to visit Anne and Ken in Cambridge, 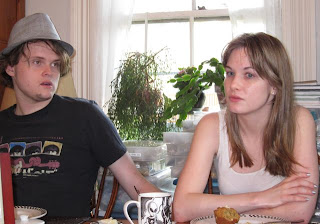 and were joined there by Colin's mother, Su.  Both of us—Colin and Anne, that is—wanted to throw a party to honor Sherry, Anne's local best bud who helped Colin out of a jam last spring, inviting Sherry's partner, Joan, as the seventh guest.
Talking this over weeks in advance, Colin had suggested a grazing menu: the kind of dinner made up of lots of smaller dishes, served casually and without the traditional sequence of courses. 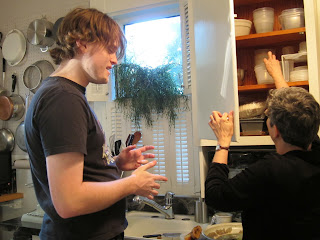 "Sounds great," one of us said.  "But remember Joan can't have wheat, or cow's milk, or sugar, or anything fermented, and there are all those things Ken doesn't like.  And oh yeah, your mom doesn't eat meat.  Won't we be run ragged making a gazillion different dishes, and trying to accommodate all those restrictions?"
"Don't you see, that's the beauty of it," said the other.  "We'll make something everyone can eat.  Nobody with restrictions will be able to have everything on the menu, but we'll make sure each person gets to try at least a couple entrées and some side dishes.  And we can have different versions of dessert: with, and without sugar.  I think we can do it!"
"Well okay," said the first (older and lazier) person.  "But we have to keep it down to four entrées.  And we've got to be organized: plan everything in advance, and make our shopping list as soon as you get here."
"We'll make everything we can ahead of time," said the second.  "That way, we can enjoy our own party.  This is gonna be fun!  Hey," continued the wild-eyed chef, "what would you think of grilled pineapple wrapped in coconut crêpes, with lime-infused whipped cream...?"

So that, dear reader, is what we did.
We researched.  We planned. We compromised and changed our minds: crêpes became brown sugar shortcake, the cream transitioned into goat milk crème fraîche, while seasonal blackberries and some grilled mango joined forces with the pineapple. 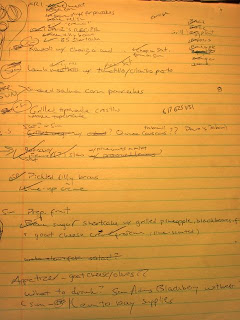 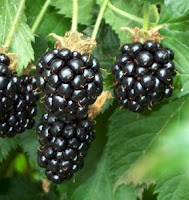 We to-do listed, shopped, and pre-prepped for days in advance—while still making time for Colin to show Eden around town.

On the big day, everyone pitched in.  Eden took dozens of photos of the chefs and their creations—a big thank-you to her for almost all the shots you see here, by the way—the rest are courtesy of Sherry. 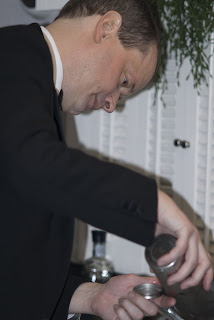 
Su helped set up, rescued us from a rock-hard-grilled-French-bread crisis, and washed, and washed (and washed) dishes while the prep. went on.


When our guests arrived, even they were pressed into service: Sherry drove Anne on what may have been the quickest emergency smoked salmon run in culinary history, and Joan—who heroically ate dairy, even though she was abstaining from it at the time—oversaw and beautifully organized the clean-up operation after dinner.


So how did our storied occasion turn out?  Despite the above-aluded-to crises (last-minute glitches with vanishing smoked salmon, and weapons-grade adamantine pre-grilled French bread) we have to hand it to ourselves: we did pretty darn well, if we do say so.  Everything came out close to the way we envisioned it—well kinda sorta, in the case of those crostini, where we had to sub in toasted sliced croissants for the overly al dente French bread: they were okay, but I wouldn't recommend doing that again.  (Oops!)  Anyhow, the rest of the dishes were fine: the chouriço wontons were a delightfully piquant discovery, and those lamb mini-meatballs with delicious (and not terribly difficult) cilantro-tomatillo pesto: mmm, mmm!
Likewise the shortcake with grilled fruit (though we still want to try making the dish with coconut crêpes someday.)

We met our goal of accessibility, too: Joan could eat the appetizer, meatballs, salmon-corn pancakes (which are gluten-free) slaw, tabouli, and a dessert variation we did without shortcake or sweetening in the crème fraiche; meanwhile Ken, who dislikes many vegetables and tabouli, happily skipped the crostini and all the sides, and enjoyed everything else.  All the dishes except the wontons and meatballs were friendly to Su's lacto-ovo-pesco vegetarianism.
And we did NOT run ourselves into the ground doing all this.  We were able to grill the veggies and fruit, pickle the beans, grind the lamb, make the pesto and bake the shortcakes days in advance; then we made wonton filling, pancakes and pepper relish for them, slaw, quinoa and crème fraîche the day before the party.

That left us only the wontons and meatballs to cook on the day; 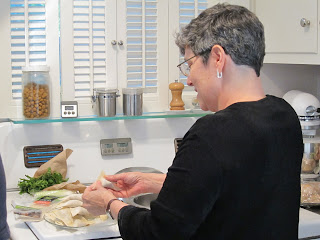 the rest of the work was assembly: putting together the appetizer platter, pancakes, crostini, and the shortcake-and-fruit dessert.  Of course, we tasted all the pre-made dishes and adjusted the seasonings before serving...aww, it's a nasty job, but someone's got to do it! 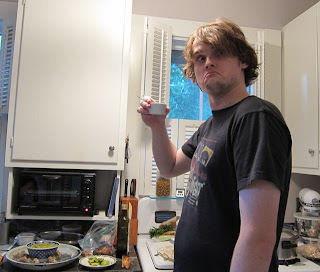 Our guests did wash an awful lot of dishes after dinner: that's one thing we'd do well not to repeat.  But everyone seemed content, if a little dazed with too much food.

And so they all lived happily ever after.  The moral—a fable has to have a moral, after all—might be to cook before you leap; i. e. do as much as you can in advance, if you're putting on an elaborate menu.  And oh yes, the more the merrier (dishes, that is.)
Grazing is good. 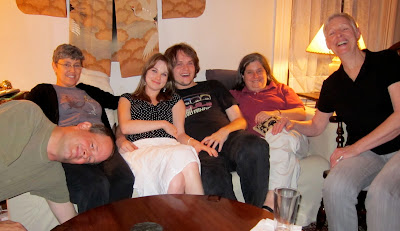 e-mail us: you can send your comments, recipes, or a personal message to Anne and Colin at: everything-tasty@annedesigns.com
Posted by Anne Milton at 9:00 AM