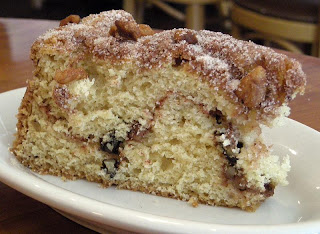 I just brought this old-fashioned sour cream coffeecake to a Chanukah party, and was so flattered to be asked for the recipe. It's one I've happily used for many years: light and moist, with a delicious melted cinnamon-sugar layer in the middle. The recipe is virtually universal—you'll find variants of it all over the place, claimed by several different ethnic traditions. (That means it must be good, right?)
Thoughts for Buffets

cookbook, ca. 1958
Amended by Anne (with thanks to Laurie LeMaster Stern)

Makes about 20 moderate-sized pieces
This recipe was given to me when I was twelve, by my cousin Laurie.  She said you could use any type of nuts, not just pecans, and that you could add whatever spices you wanted in place of or in addition to the cinnamon.  “Just put in whatever you like,” Laurie said, which was remarkably liberating.  I tried many combinations over the years, and find I like the recipe best the way it is.

e-mail us: you can send your comments, recipes, or a personal message to Anne and Colin at: everything-tasty@annedesigns.com
Posted by Anne Milton at 10:04 PM