Bunch is the Mother of Invention: Hangtown Fry with Nopales

I've written several times on this blog about the idea that perhaps the most important thing you can do, food-wise, is to have a well-stocked pantry. A big part of that is the idea of security: that with the right dried, canned, pickled, and cured ingredients available, you'll always be able to whip something tasty and reasonably nutritious up. But there's something that goes beyond that too: the potential for creativity.

Recipes are an incredible thing–a well-written one can expand your cooking horizons, guiding you to a finished product you wouldn't have known how to begin approaching on your own. Any of you who knew Anne knew her obsession with recipes, combing through cookbooks to find something wonderful and execute it precisely. I can't help but mess with recipes–which both amused and bemused her on occasion–but that doesn't mean I don't value them. Recipes teach you skills, guiding you through steps you can then apply freely in other contexts, and they teach you combinations of flavors that can spark your imagination to new places. Certainly, there is joy in making a plan, going shopping for exactly the ingredients you need, and then pulling it all together step by step.

Nearly all recipes, however, even the immortal classics, started in the same place: with someone looking the food they have on hand–staples kept always in stock, bits youpicked up without clear plans for them, things harvested from the garden or the livestock or bartered for with someone else, or odds and ends left over from making other dishes–and going "right, what can I cook with this?" Most of what we cook had no singular inventor, of course, but evolved over centuries, with hundreds or thousands of cooks handing ideas down and adding their own little tweaks. Even with things developed in one flash of inspiration, the story has usually been lost to time.

However, there are exceptions. In 1943 Ignacio Anaya, maître d' of a hotel in Coahuila, Mexico, needed to feed a group of army wives from across the border in Texas who had turned up after the kitchen had closed–so he cut up and fried some leftover tortillas, added some cheese and pickled jalapeños on top, and invented Nachos. Allegedly (though there are many warring accounts), in 1971 chef Ali Ahmed Aslam of the Shish Mahal restaurant in Glasgow served some Chicken Tikka (which of course is rubbed with dry spices and roasted) to a Scottish bus driver. When the man complained it was dry and asked for some sauce, Ali threw together some tomato soup with cream and spices and bathed the chicken in it, inventing Chicken Tikka Masala.

And then, there is the Hangtown Fry. In the 1850s, the California Gold Rush was in full force, and towns sprang up out of the dirt to meet the needs of the prospectors. The largest of these was Placerville– in 1847 it was a parched scrap of dirt informally Dry Diggin's, but by 1854 it had become the third largest town in the state, and acquired the new family-friendly name of Placerville, although most people called it Hangtown, after three local outlaws were hung from a tree at the height of the gold fever in 1849. In 1857 they built the new Cary House Hotel, replacing the town's older hotels that had been destroyed in a massive fire. When prospectors struck gold, they would come straight to the Cary House to sell their nuggets and take their first actions as newly rich men. One day, one such man came into the bar, still grimy but holding up a gold nugget, and demanded that the hotel's restaurant make him the most expensive dish that they could. When nothing on the menu would do, they examined the most prized parts of what they had on hand: eggs, which had to be brought in by stagecoach, since there were no hens in Placerville. Bacon, which was shipped in from the east by train.  Most of all oysters, which had to be brought the 100 miles of rough road from San Francisco on ice so they didn't spoil. The kitchen cooked the three up together, and voila–the Hangtown Fry was born, and remains a California classic to this day.

Today, eggs and bacon are still shipped long distances, but the industrialization of agriculture and  improvements in transit infrastructure and modern refrigeration have made them plentiful and cheap. Here in greater Boston, fresh oysters were ironically dirt cheap in the Hangtown era, food for poor of a port city–but in 2017, the global taste for them has made the fresh ones a luxury even feet from the water. However, for purposes like a Hangtown Fry, the cheap canned and smoked variety will do just fine (although Boston is currently just beginning to see a rise in hip places serving high-end, pricy tinned seafood from Spain and Portugal, so check back with me in 10 years or so). I bought eggs to have on hand for breakfasts, the bacon was left over after I made Carbonara last week, the oysters I had bought a few weeks ago with the idea that they'd come in handy at some point–and I had one more ingredient lurking in my fridge that needed using up: Nopales, strips of prickly pear cactus pad, with a fantastic vegetal, pickly flavor somewhere between green chile, green beans, and okra. In Tucson you can buy them fresh, and they're used brilliantly by Mexican chefs for whole variety of dishes, especially pairing beautifully with grilled meat. Here, they only come lightly pickled in huge jars. I used a little to make tacos for a party last weekend,  and have a good deal left over- and they spoil within a few weeks of opening.

So I stood in my kitchen, considering what to do with this random set of ingredients, and my mind pinged the idea of the Hangtown Fry, which I'd read about years before. Nopales are a non-traditional addition, but they go terrifically with eggs, and besides, I think they're appropriate. In the California desert, there may well have been Prickly Pear growing right outside the window of the Cary House Hotel, there to provide a balancing finishing touch to the rich dish of bacon, oysters, and eggs–but cactus would have been commonplace, outside the notice of chefs trying to make the most expensive thing they could. Today, in Massachusetts, they're exotic–the kind of ingredient someone might reach for to make an old classic feel exciting again. Who knows? In ten years fancy hotels may be serving their brunch patrons a "Somerville Fry." I suppose, then, there ought to be a recipe.

*Or 6-8 large fresh oysters, which would be amazing but far more work if you had to shuck them yourself. Some supermarkets sell tubs of pre-shucked oysters for not much, this would be an ideal use.

1. Add bacon to a cold pan. If possible, cut into ~1 inch pieces first. Otherwise, remove when fully cooked, chop, and reintroduce towards the end. Set heat to medium and cook until just crisp. Blot out roughly 1/2-2/3 of the fat with a paper towel.
2. Add oysters, cook 2-3 minutes–they will plump up a bit as they sauté, though some may not. (If using fresh oysters, reduce this step to 1 minute)
3. Add shallot and/or garlic if using, sauté 1 minute
4. Add nopales, along with vinegar. Season with salt,  sauté 3-4 minutes, until liquid is not bubbling as aggressively and has reduced somewhat.
5. Whisk together eggs, paprika, cayenne, Worcestershire sauce, milk/cream, and salt and pepper until homogenous.
6. Add eggs to the pan and immediately remove from the heat. Scrape aggressively with a silicone or rubber spatula and continue stirring until eggs stop becoming more set.
7. Return to heat, stirring continuously, until eggs are just barely set, then remove from heat.
8.Grate over cheese (if you wanted to go in a creamier direction, you could instead use 1/4 cup of pepper jack) and serve immediately with toasted or grilled sourdough or other hearty bread, fold in warm tortillas and serve with green salsa as a breakfast taco, or just eat on its own–it works well all by itself. 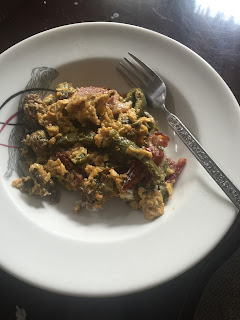 Posted by Colin Killick at 3:51 PM