Savory Croissant Bread Pudding: So much better than it looks.


Bread pudding is something of an inside joke between Annie and I.

Not that there's anything inherently funny about the dish (not ha-ha funny, anyway–certainly turning stale bread into desert is a mite odd, although considering the Russians make a drink out of it, we could be doing a lot worse.)

No, it's that Annie has a problem. A couch problem. Specifically, she often can't so much as come into contact with a couch (ours or anyone else's) without falling sound asleep. (In fact, she's done it again as I'm writing this.) I have embarrassing photos that I'm really tempted to post, but for now I'll refrain.

Anyway, not long after returning from a trip to Malawi in April 2014, Annie and I were sitting on the couch late one evening (this is when I was still living with Ken), I turned to say something to her, and realized she was out cold. Ordinarily I'd just wake her up and we'd haul ourselves off to bed, but I was still finishing my antimalarials and had to wait two more hours before I could take the next dose. With her asleep, I wandered into the kitchen, saw the loaf of stale bread on the countertop, and decided that the best way to kill time was to make bread pudding at 11:30 at night. Since, as I think I've discussed in these parts before, I don't have much of a sweet tooth, I went with a savory approach--sautéed leeks, which I happened to have on hand, white cheddar, and a spiced custard spiked with Worcestershire sauce. I poured everything into a baking dish, covered it with foil, stuck it in the fridge, got Annie semi-awake long enough to drag her upstairs, and we swiftly fell asleep. She was quite perplexed to discover the next morning, while no apparent time had passed for her the night before, I'd made brunch that was now going into the oven. And once I'd gotten the idea into my head, I did this again some evening while she was dozing, and she began to joke that she could make bread pudding appear by sleeping. On both instances I took pictures, intending to post the recipe here, but as with a great many recipes, I didn't get around to it.

My pudding productivity has dropped off since then, but it's a lovely trick to pull out every once in a while, especially since really good bread always goes stale in about five minutes. Savory bread pudding in particular is something I'm shocked isn't more common--while the sweet kind can get a bit one note and cloying in anything but a small portion, and doesn't seem to have that wide a scope of variation, savory bread puddings are a blank canvas. I've put every allium from shallots to scallions to caramelized onions into them, roasted tomatoes and green chiles, and flavored my custards with a wide variety of spices and sauces, and it always comes out terrifically. So, here's my latest variation, done this past Sunday, done after I was in a cafe the preceding evening and kindly given the two croissants in the case that would otherwise have gone to waste. The results were complex, hearty, decadent, and absurdly satisfying. Enjoy–and then try out a variation of your own.

1. Preheat oven to 250. Tear croissants into small irregular chunks and toast on a sheet pan or baking dish until dry and crispy (~15 minutes)
2. Sauté leeks and preserved lemon with oregano, cumin, salt, pepper, and hot sauce until leeks are browned, somewhat sweet and slightly charred. Reserve and set aside.
3. In a small mixing bowl, add two eggs and mustard to milk and whisk until smooth. Add Worcestershire sauce, sherry, and spices, adjusting to taste.
4. In a large mixing bowl, combine croissant pieces, leek mixture, cheese, and sausage. Pour over ~1/3 of the custard mix and fold with a spatula until absorbed. Repeat with the next 1/3 of the custard mix, and then add remaining custard only as necessary to ensure mixture is fully moistened.
5. Transfer bread pudding mixture into a buttered baking dish, and let stand at least 15 minutes and up to overnight
6. When ready, preheat oven to 350 and insert baking dish uncovered. Bake for 25-35 minutes, until croissant pieces are firm and golden brown.
7. If desired, crisp the top under the broiler for 1-2 minutes until fully browned and crisp
8. Serve immediately.

Ok, this photo really doesn't do it justice--this was just what was left after we devoured the rest of it, but here goes. I promise you, this tasted pretty terrific. 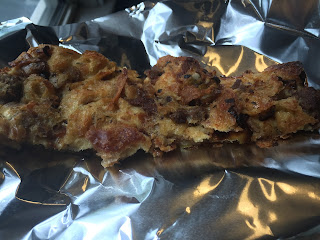